Llanfabon has the recipe for successful fundraising.

Llanfabon Mothers’ Union branch would like to share a fund raising project they have developed with the proceeds going to the AIFA caravan.
They have produced a small, easy-to-cook recipe book. It is a collection of mains/ desserts/ soups and store cupboard recipes and offered to everyone for a £1 donation – proceeds to the caravan.
It has proved extremely popular. They initially produced 120 copies and sold out. After production costs and with a few small donations, they raised £110.
Their marketing technique was to give an amount of books – 10 or 20 to neighbouring MU branches and they sold quickly! Branches that have sold them report that they were popular and were snapped up very quickly.

A new edition has been produced and copies will be given to the remaining branches in the deanery at the next deanery meeting and hope they will prove just as popular.

Llanfabon MU thought they would share this idea as it is such an easy exercise to do, and could be used through the diocese – bringing in about £200 a deanery, adding up to £2000 from the diocese.

Let us know of your projects and ideas to raise money and put MU on the map! 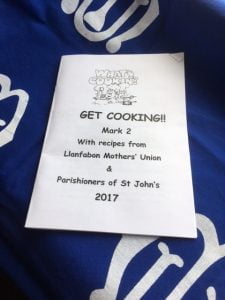