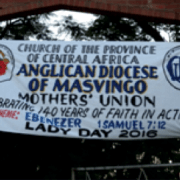 From Friday 1st to Sunday 3rd April 2016, the Mothers’ Union in the Diocese of Masvingo celebrated 140 years of service to families and communities. During the same celebration the Mothers’ Union also observed belated Feast of The Annunciation To The Blessed Virgin Mary [Lady Day].

The Theme was ‘Ebenezer’ meaning ‘stone of help’ as a reminder of God’s leading and guidance ‘Thus far has the Lord helped us.’ The Theme is based on 1 Samuel 7:3-12. The attendance was very good; all in all 1,000 members attended the celebration in Masvingo at the show ground.

Throughout the celebration some members put on this special regalia to bring out the 140th Anniversary Celebratory mood. In her opening address in the evening on Friday 02 Friday, the Diocesan Mothers’ Union President; Albertina Tawonezvi encouraged members to continue to reach out to families in the midst of many challenges that are prevalent in the day to day life of ordinary Zimbabweans.

On Saturday 03 April at 5.30 am members of the
Mothers’ Union marched from Masvingo Show
Ground to the City Center. [Masvingo Show Ground
is 2 Kilometers from the City Center]. During the
march the Mothers’ Union members were under
Police escort singing, dancing holding their Mothers’ Union Banners and another Banner specially made for this occasion with the 140th Anniversary Logo. At designated places the M.U. Members would stop and Preach to curious onlookers. The atmosphere was lively and the Members were indeed in a Celebratory mood.

(Makes our celebrations sound a bit staid doesn’t it… 5.30am too! Ed.) More from Masvingo next time