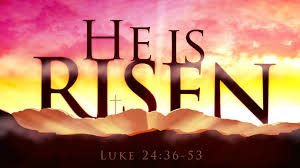 The disciples on the road to Emmaus were at rock bottom. They had had hope and their hopes had been dashed. They saw a golden future, but that future had been ripped away from them when their Messiah had been stripped, beaten and nailed to a cross. They had found consolation with others in their grief, but such companionship had been denied them. They had to leave Jerusalem in fear of reprisal because Jesus body had apparently been stolen. Then, as if to add insult to injury, some of those they trusted most had come up with this most unbelievable of stories – angels had apparently told them that Jesus was alive. It just did not make sense.

During their walk they were joined by someone who was able to make sense of all that they had experienced. Someone who was able to look at the bigger picture. Joining together individual incidents, personal experiences and the great themes from history in order to help them understand what has been going on. And what a difference that understanding made to them. They were able to accept what had gone on in recent days. They were able to recognise the Risen Lord and they were filled with new hope. Such new hope that despite the fatigue from their walk they immediately returned to Jerusalem to share their new found hopes.

Then they told what had happened on the road, and how he had been made known to them in the breaking of the bread. While they were talking about this, Jesus himself stood among them and said to them, ‘Peace be with you.’ Luke 24. 35, 36

This time their actions were immediately rewarded as they were able to see Jesus again. Not veiled by their lack of faith but clearly as Jesus stood in the midst of them assuring them with his words – “Peace be with you”.

So, we pray that we will be able to find the voice of our Risen Lord in our lives. The voice that helps us understand all that is going on, the good and the bad. The travelling companion in our life journey who listens to our dashed hopes. The one who gives us burning hearts and new hopes for our re-imagined futures. The one who is always stood among us proclaiming – Peace be with you!

He is risen indeed. Alleluia!

With all my love and prayers,