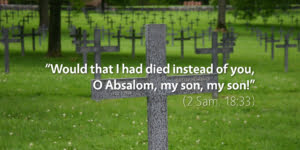 This week, as has happened to many of you in the past, I have experienced the reality of love at first sight. To hold a newborn member of the family for the first time and gaze into their eyes, is to experience love. Such parental love can be more enduring than the love between a couple. Families may not always get on, battles may be waged, children move away and fail to get into contact for years on end. But ultimately that moment of first encounter, though buried, is still present somewhere deep within.

Relationships between King David and his son Absalom became so strained that David had to flee from Jerusalem. Civil war ensued which David’s troops ultimately won but the winning brought much pain to the king. Even before the final battle, David is conscious that there is the potential for his son to be killed and that grieves him. Despite Absalom’s disloyalty, he is still David’s beloved child. So, he gives his commanders orders to deal gently with the young man Absalom.

When David hears that despite his orders his son is dead. He is devastated. No matter what he had done. No matter what disloyalty he had shown, David still loved his son. David’s words of grief are ones that have been expressed time and time again by parent’s who outlive their children – ‘O my son, O my daughter. Would that I had died instead of you’.

Most of the causes of death for those younger than us these days, are due to medical conditions that we have no treatments for. There is nothing that we could have done to save our loved one’s lives. Absalom, David’s son, however, did not die from infection or disease but because of conflict. Conflict that came about because of anger. Would that they could have patched up their differences at an earlier stage.

Bringing our hurt and anger to Jesus gives us the opportunity for healing; personal healing, and healing of strained relationships. Healing which can lead to reconciliation, restoration of relationships and ultimately rebuilding of our own self-esteem. Such unconditional healing from our loving Lord Jesus helps us to act with restored kindness, tender-heartedness, forgiveness and love.