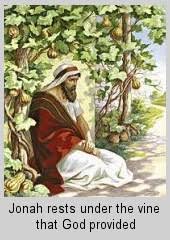 Anger is a perfectly natural human emotion to situations which we find difficult or indeed seemingly intolerable. Those who break to rules of civilised society, putting others at risk of harm, cause us to feel anger and hurt. We particularly get angry when the people we trust the most seem to let us down. So, it is not surprising that when we feel God has let us down that our anger can seems most intense.

So, he sat and sulked, but God still loved him and provided protection for him in his anger. A bush grew giving him shade from the baking sun. The following morning a worm destroyed the bush and Jonah became angrier still. What Jonah needed to learn about was the bigger picture. He was angry that a bush which he had not planted or nurtured was taken away from him. He was angry that God, who had given him a message to deliver, had apparently changed his mind.

At the moment, many of us are still reeling from the apparent injustice of the past two years, the random way that the virus has acted, the continuing knock-on effect on public services, with long waiting lists and lack of face to face appointments with GPs. Taking time to appreciate the bigger picture, the lives that have been saved and are continuing to be saved, can help us cope and go someway to dissipating that anger. Trusting that no matter how frustrating things seem, God always has a handle on the bigger picture.