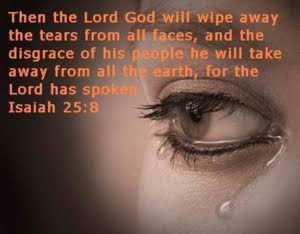 Then the Lord God will wipe away the tears from all faces,
and the disgrace of his people he will take away from all the earth,
for the Lord has spoken. Isaiah 25. 8

Earlier in the year I watched a very moving series hosted by Anita Rani, entitled Saved by a Stranger. The aim of the programme was to reunite people with those heroes who had rescued them at the most desperate times in their lives. One particular case that really stood out for me was that of Marc. Marc was 17 years old in 1986 when he was diagnosed as HIV positive. He talked about how the diagnosis made him feel numb, particularly when he was told his life expectancy was 3-6 months and that he would have a long painful drawn-out, ugly death. He started attending The Landmark in Tulles Hill, London which provided support for those diagnosed with HIV. His counsellor, John, had given him the strength to go on. Helping him find hope for the future. When they were reunited, it was the reaction of John that I found most moving. He was so grateful to meet someone from those early days when AIDS and HIV were only just being identified. He talked about how there was nobody else left from those days and how he never thought he would see Marc again.

Today is World AIDS Day and reflecting on this programme about Marc and John shows us just how far the treatment of those who are HIV positive has come. Marc, due to the triumph of medical science, no longer has a detectable viral load. The virus is not completely defeated, however, due to the differences in the treatment availability across the globe. That is why today we are asked to pray for the work of all those agencies who aim to End Inequalities, End AIDS.

The story of how the lives of those infected with HIV has changed over the past 35 years due to the work of dedicated virologists, immunologists as well as campaigning charities which provide emotional support, gives us a wonderful example of how God brings about restoration, healing and social change. Something to hold onto in a week when we come face to face with the reality that the Covid-19 threat is not yet over.

God, open our eyes to the systems around us that oppress, hold down, and disadvantage the most vulnerable in our society.

God, open our ears to the myths, stereotypes, and lies that keep these systems going.

God, open our mouths to challenging conversations about race, sex, and differences.

God, open our hearts to the understanding that we are all affected by HIV/AIDS. Amen