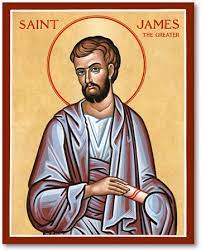 About that time King Herod laid violent hands upon some who belonged to the church. He had James, the brother of John, killed with the sword. Acts 12. 1-2

Today the Church remembers St James, known in his lifetime as the brother of John, son of Zebedee, fisherman, apostle, son of thunder, followers of Jesus. Known in death as a martyr, patron saint of Spain, founding father of the Christian Church, whose symbol is a Scallop shell – Coquilles St. Jacques. A man murdered by decapitation with a sword, whose body is buried in Santiago de Compostela but whose head is in the Armenian Cathedral in Jerusalem. So many different ways to describe James in relation to the world.

But we can also describe James in terms of his relationship with Jesus. A man who responded immediately when he was called, following Jesus to the end of his life. A man who was called into the inner sanctum of the house to witness as Jesus raised Jairus’ daughter from the dead. A man who was present on the top of the mountain when Jesus revealed a glimpse of his true glory at the Transfiguration. A man who slept in the Garden of Gethsemane whilst Jesus wept over the agony to come. A man who spent three years of his life learning from the greatest teacher of all time. Learning about the coming kingdom, learning how share the good news, learning how to heal, to cast out demons. Learning how to bless, baptise and share Christ’s peace with all he came into contact with.

James’ life is best understood when we view it in relation to Jesus. Even after the Ascension, everything that James did and said was directed by his love, faith, and loyalty to his risen Lord. Even his tragic death was caused by his unwavering determination to teach and preach about all that Jesus had done for him and indeed for all people. James and his brother John may well have got it wrong occasionally – suggesting that they should call down fire from heaven to consume the Samaritan village, which would not receive them. Or asking for the privilege of sitting one on Jesus’ left hand and one on Jesus’ right hand in the coming kingdom. But James continued to grow in Christ and eventually, as he promised to Jesus, he was able to drink the cup that Jesus drank and become a servant to the Gospel. Giving his life as a ransom for many. Can we do the same?