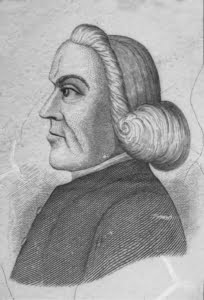 Today the Church in Wales remembers Howell Harris a highly popular preacher from the 18th Century. Howell was born in Talgarth not far from Llangors Lake and what is now the Retreat Centre at Llangasty. Indeed, he was the schoolmaster at Llangasty from 1732-35. Howell developed a strong faith and passion for evangelising but was not successful in his quest for ordination. Instead, he followed his call to preach the Gospel and became an itinerant evangelist spending 12 years travelling in South Wales, then North Wales and on into England. He had phenomenal stamina. As recorded in his personal journal, on one occasion travelling of 600 miles in 33 days having visited 5 counties in Wales, through the west of England, through Bristol, Bath, Exeter, Plymouth dock and Cornwall, finally arriving home at two on a Sunday morning.

Despite not being ordained Howell’s ministry was crucial in the 18th Century revolution in the religious life of Wales. By the end of his ministry there were 433 religious societies in Wales and the borders which are said to have influenced the character of the people of Wales for over 200 years. Howell gives us a wonderful example of how each and every one of us can share the good news of all that Jesus has done for us. What we need is not years and years of academic study but lots of enthusiasm for our message. Enthusiasm that comes from faith and is sustained by maintaining a prayerful personal conversation with our loving Lord.

The Psalm set for the commemoration of Howell Harris expresses this enthusiasm for telling people the story of God’s interaction in the world.

Great is the Lord, and greatly to be praised.

his greatness is unsearchable.

One generation shall laud your works to another,

and shall declare your mighty acts.

On the glorious splendour of your majesty,

and on your wondrous works, I will meditate.

The might of your awesome deeds shall be proclaimed,

and I will declare your greatness.

They shall celebrate the fame of your abundant goodness,

and shall sing aloud of your righteousness.

The Lord is gracious and merciful,

slow to anger and abounding in steadfast love.

The Lord is good to all,

A message for all that we are called as Mothers’ Union members to proclaim to the families we serve. Helping them to discover that no one is beyond the love and compassion of our Loving Lord.

Mothers’ Union Devotion Sunday 25th July 2021 Feast Day of St James the A...
Scroll to top
This website uses cookies to improve your experience. We'll assume you're ok with this, but you can opt-out if you wish.Accept Reject Read More
Privacy & Cookies Policy