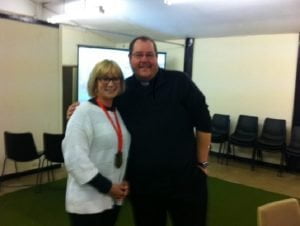 Donna Jones is a member of both Llanfabon Mothers’ Union and the congregation at St Johns church, Nelson. This year she applied to run the London Marathon for the first time. Donna had already achieved success in running Half Marathons and with her first application was accepted to run in the 2017 London Marathon

On the morning of Sunday April 23rd Fr Gareth Coombes and the congregation at St John’s said a prayer for Donna as the London Marathon was about to begin. Our prayer must have winged its way to London, for Donna completed the Marathon safely and achieved her ambition of being awarded a London Marathon medal.

Here is Donna’s own story of the day.

April 23rd 2017 I found myself stood with many thousand other very nervous, amateur, enthusiastic runners waiting to achieve our goal      of completing this year’s London Marathon

I had spent the last hour checking out the other runners thinking – they look so professional, they have done this before, they are much fitter than me! Then I prayed for commitment, willpower and the safety of all of us as I walked to the start line.

Had the hours of running over the past few months, the runs to Cardiff, Merthyr and Penarth Road, been enough? The doubts were there but the fact that so many people had kindly sponsored me and were tracking me at home ensured I was going to do this!

My husband, son and mum, were waiting at mile 10, 15, 19, and at the finish. I was able to break the run into 4 parts which helped enormously.

I had read stories from past Marathons of great friendships made during the race. This wasn’t my experience, however everyone was friendly and made sure every runner kept going with positive comments and sometimes a physical helping hand. The friend running alongside me was God, helping me use my willpower and commitment to finish and keep me safe in our troubled world. As I crossed the finish line there were many emotions tumbling through me; relief, pride, happiness, pain and there were tears, lots of tears. As I collected my medal and goody bag all I could say was “I did it, I did it!!”

It was a very special day that I was happy to share with family, friends and God.

Donna raise £1600 for ASD Rainbows a charity working with children with autism and their families, based in Mountain Ash, but helping families as far afield as Hereford and Cardiff.

It is a charity very close to Donna’s heart.

Donna we are so proud of you at Llanfabon Mothers’ Union and the Parish!!