Llandaff Diocese sends congratulations, love and prayers to Sheran Harper on her election as Worldwide President 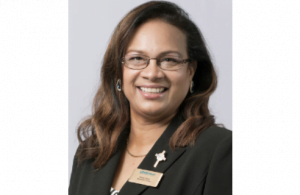 A record number of Mothers’ Union leaders from across the globe voted for Mrs Sheran Harper, who hails from Guyana, to represent and lead the 142-year-old movement’s four million members in 84 countries.
“I am delighted to accept the role of Worldwide President for the new triennium. I feel very excited and privileged and I extend my heartfelt gratitude to our members who voted to make this dream a reality,” says Mrs Harper, who will take up her new position in January 2019.

Lynne Davies, Llandaff Diocesan President sends her best wishes on behalf of the Diocese, “Congratulations to Sheran Harper our newly appointed Worldwide President, the first overseas person to be elected. Every blessing and love for the next triennium from Llandaff Diocese Mothers’ Union”.

About Sheran Harper
Sheran Harper was born in the United Kingdom and grew up in Guyana where she studied at the University of the West Indies School of Physical Therapy. She undertook her Clinical Practice at Guy’s Hospital in London and then worked with the Ministry of Health in Guyana where she opened and managed new physiotherapy departments in hospitals throughout the country and lectured on the Rehabilitation Therapists Programme. She stopped working in this area 17 years ago to focus on her calling of serving Mothers’ Union. She has served as a volunteer at all levels from Parish, Diocese and Province and is currently a Worldwide Trustee. Until recently, she was the Worldwide Parenting Trainer where she rolled out Mothers’ Union Parenting programmes in 23 countries across the globe. Her expertise is often called upon and she has been a spokesperson in her region for Mothers’ Union on various inter-faith, and international panels and forums.
Sheran has been married to Roger Harper for 31 years. They have two grown up sons, Richard and Reginald and a daughter-in-law, Akilah.
Mrs Harper is proud to be leading an organisation that is making a difference in the lives of over three quarters of a million people worldwide. “Mothers’ Union is as relevant today as it was 142 years ago as the call to support families globally is now even greater. We are working alongside governments and other organisations in tackling issues which affect families wherever they are. In remote areas, where there is no access to social services, it is often Mothers’ Union that is leading the way,” she says.