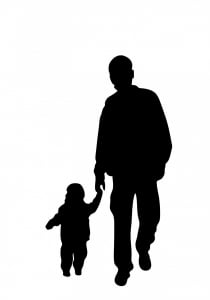 Today is Father’s Day a relatively modern feast compared to Mothering Sunday. There are many origin stories on the internet including one from Washington in 1910, when Sonora Louise Smart convinced her pastor that fathers should be remembered in the same way as mothers.  Her own father had brought up his six children, with the help of his eldest Sonora, after he was widowed. She tried to get the pastor to celebrate it on the 5th June, her father’s birthday. Apparently, he did not have time to prepare his sermon for that day so the first Father’s Day service was held on the third Sunday in June.

The popularity of Father’s Day did not really gain momentum until the commercial world saw a good marketing opportunity and changed it from a service of thanksgiving for fatherhood into the second most important day for gift giving to dads. The original sentiment of celebrating fatherhood and the role fathers have in bringing up their children, however, seems particularly poignant at the moment.

For some fathers, this time has been one of extended separation, with children too far away to visit or having to endure longer potentially high-risk working hours for those who are key workers. The same is true for many grandfathers and great grandfathers who long to see the younger generation whom they love so very much.

Other fathers have been able to spend much more time with their children over the past three months. Helping with schoolwork, going on walks in the local area, playing games indoors and outdoors with the wonderful weather we had initially. As well as having the time to take a more active role in caring practically for their children.

Fatherhood is an ever-changing role in our communities, with dads taking a much more hands-on role these days compared to Mary Sumner’s times. I hope she would be pleased to see the way families have been drawn closer together over the last few months. Even when families cannot come together physically, new, and more frequent methods of keeping in touch have allowed members to realise that they are loved and cherished within their extended families.

So, yes, Father’s Day is a relatively modern invention where cards are sent, and gifts are purchased but that does not detract from the central sentiment. It is a day to thank God for our fathers and those who have been like fathers to us. It is a day to reflect on those fathers we admire and a day to commit ourselves to continue working to support family life in whatever shape and form that might emerge over the coming months and years.

We thank you for fathers near

And fathers with feeble knees

Present at table and bathtub and at bedtime for prayers.

Thank you, God, for fathers near.

We thank you, O God, for fathers far away

Fathers who ache for their families,

Fathers absent because of war,

Fathers who are present and absent at the same time

Thank you, God, for fathers far away.

We thank you, O God, for caring communities

Where mothers fill in for fathers

And fathers fill in for mothers

And grandparents put on the apron and the towel.

Where aunts and uncles, and those who are absolutely no kin at all

Make our communities a home