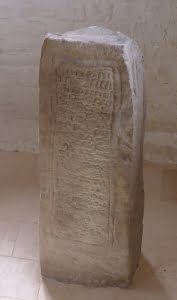 Yesterday, the Church in Wales celebrated the life of Samson of Dol. Samson was born in Dyfed around the year 480. The Life of Samson is the earliest account of a saint from Wales that we have today.

From this, we learn that he was educated at the school of St Illtud in Llantwit Major where he became devoted to a life of prayer. In fact, Samson spent most of his life trying to isolate himself from others so that he could keep up a constant vigil of prayer.

His first journey was to a new extremely strict monastery on Caldey Island. From here he embarked on a journey to Ireland then to a cave near the River Severn, before crossing the small sea to Cornwall. Still not content, he crossed the big sea to Brittany where he died in approximately 560. Samson lived for many years as a wandering pilgrim, a Peregrinatio, living in self-exile from his country.  A particular form of self-exile for Christ, in which the pilgrim moves away from all the things that bind them in their secular lives, allowing them to draw closer and closer to Christ.

At the beginning of this year as a diocese we began the process of thinking about pilgrimage and what is meant to us. We had our Mothers’ Union pilgrimage book and our pilgrim bear Mair who began their journey around our branches. Many of our individual churches and parishes had planned trips around the diocese and further afield. And then all our plans came to nothing as we began a totally different form of self-exile.

Well, exile at least! It may not have been self-imposed, but we all found ourselves separated from many things we took for granted. Like Samson we became separated from family, from our social lives, our favourite places. Like Samson we spend days and weeks confined to a single location. Okay our place had comfortable seats, a warm bed and plenty of food but we were still restricted in our movements.

We may not have had the chance this year to go on a physical pilgrimage, but I believe that instead, we have all gone on an inner pilgrimage. A travelling towards Christ enabled by having the time to reflect, to take stock and to ask the ultimate questions about what is most important in our lives. So, what do we do with this new closeness to Christ we have experienced?

Well, Samson eventually gave up his life of self-exile and settled in Dol, which is near St Malo in Brittany, as their first bishop. Dedicating the remaining years of his life to sharing his faith with others both through word and action. As we too begin to escape our exile, we will find our communities to be places which desperately need the sort of help that our Mothers’ Union branches here in Llandaff are experts at providing.