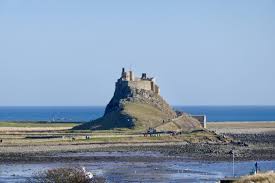 Today, the Church in Wales remembers Oswald who was born into the royal family of Angles who occupied Northern Britain in the 6th and 7th Centuries. When his pagan father was killed, Oswald and some of his siblings went into exile on the island of Iona, where they were brought up as Christians in the monastery founded by Columba. After 17 years, Oswald recaptured his father’s land in what is now Northumbria. Once he was settled, he appealed to Iona for missionaries to be sent to convert the pagans to Christianity. After an initial failed mission, a second successful mission began led by Aidan who founded the monastery on Lindisfarne.

Aidan and his party were welcomed with open arms by the devoutly Christian Oswald, who loved to pray with the monks but was often called away by his duty. Oswald was called the Open Handed because he prayed with his hands open on his lap. One Easter, Aidan saw how truly open-handed King Oswald was. Just as they began to sit down to celebrate Easter there was a knock on the castle door. A servant appeared and told Oswald that there was a great campaign of poor people outside. The winter had been hard, and they were starving. Oswald ordered that the great silver dish laden with the best food, which was in front of him, should be given to them and after a pause he added – ‘and give them the silver dish that the food is on. See that it is divided up among them so that they all have something for another day’. Aidan was deeply moved by such generosity. Taking hold of the open hand of Oswald he said, ‘May this hand never wither with age.’  Bede records that this hand did not wither after Oswald’s death.

The tension between giving immediate help to those in need versus providing for their long-term needs is one that occupies many governments, Non-Government Organisations, and us as individuals. Do we give all our money to disaster relief appeals or keep it for reconstruction projects? Oswald’s example shows us that we can do both. Keeping our eyes and ears open for where our help is needed immediately and praying for the wisdom to find long term projects, which not only sustain but improve the lives of those we serve well into the future. It is in such moments of generosity that we also act like Oswald in enabling people to encounter Jesus. Helping them to feel, through our actions of love, that no one is beyond the reach of the love of Jesus.

Lots of love and prayers,