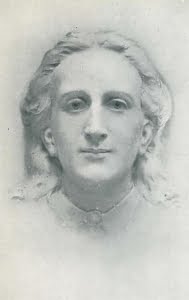 Today, the Church in Wales remembers Ann Griffiths, a Welsh poet who died in 1805 at the age of twenty-nine. Ann lived on a farm in Dolwar Fach in North/Mid Wales in a loving Christian home. Along with her brothers, she became caught up in the Methodist movement with its enthusiasm for prayer and singing. She began to write hymns herself but none of these were published until after her death. Many were not written down instead they were shared with her companion Ruth Evans, who found the tunes which first fitted Ann’s words. Ruth in turn, could not write so dictated them to her husband John Hughes.

We know very little about Ann, no portrait exists other than what we read in her hymns and letters which are all about her inner spiritual life. Her biographer asked a close companion of Ann, what she was like and she replied, ‘Just think of her hymns and what they say’ and she began to quote them. He comments ‘Ann had disappeared behind her hymns.’

Hymns were written in her native language – the language of heaven. If you look in most English hymnbooks you will not find any hymns by Ann Griffiths. But look in a Welsh hymnbook, however, and you will find many of her hymns such as:

For those of you who do not speak Welsh:

Lo, amid the myrtles standing

One who merits all my love,

Though but dimly I discern him

To excel all else above.

When the shadows flee away.

He is called the Rose of Sharon,

White and radiant, fair of face;

Princes of our mortal race;

And their pilot on the sea.

Why with vain and worthy idols

Should I wish to tarry more?

For they are not to be reckoned

With the Lord whom I adore;

Let me in his love abide.

You may not recognise these words, but you might well have sung them in Welsh because they are sung to the tune of Guide Me O, Thou Great Redeemer.

It seems very poignant to be celebrating a Welsh hymn writer at a time when we cannot sing in church. The power of the hymn writer to express our faith with heartfelt words cannot be overstated. Carefully crafted poetic words, which bring our inner emotions to the surface in a way we would struggle to voice ourselves. Our curtailed worship will not last for ever and imagine the joy we will feel when we can once again join in singing God’s praises with the words composed by such poetic greats as Ann Griffiths.

All my love and prayers