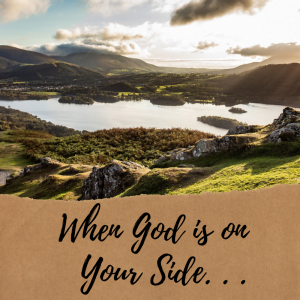 Then the prophet Miriam, Aaron’s sister, took a tambourine in her hand; and all the women went out after her with tambourines and with dancing. And Miriam sang to them:

’Sing to the Lord, for he has triumphed gloriously;

The song of Miriam comes at the end of the crossing of the Red Sea, when the Israelites had made it safely through the parted waters to the other side and the Egyptian soldiers drowned as the waters returned. I imagine they were exhausted both physically and mentally. They had run for their lives when the army of Pharaoh had appeared on the horizon. They had watched in amazement as the waters parted. They had walked on the dry ground between the walls of water on either side. They had experienced a new wave of panic as the Egyptians pursued them into the sea. Then they had witnessed the horror as the sea returned, engulfing their pursuers until not one of them remained alive. What an awesome and at the same time terrifying display of God’s power they had witnessed. It would have been understandable if they just collapsed and vowed never to move again from their safe resting place. Time, however, is the great healer. As they rested, their strength was restored, and they were able to take in the enormity of what they had lived through. As it dawned on them that God had led them to freedom, they began to praise God. Praise God not just with a few carefully chosen words but with a spontaneity which led to singing, dancing and shaking of tambourines.

The song of Miriam gives us hope that no matter what we have been through. No matter how exhausted we are mentally or physically. No matter how strange and disconcerting the situation we find ourselves in. No matter what losses we have suffered. There are always moments of spontaneous joy in our lives. Joy when we glimpse just a small part of the wonder of the world we live in. A world which is daily created, sustained and restored by God. Our God, who brings hope to our souls when we place our trust in his power to triumph gloriously in our lives. In the words of the newly freed Israelites in the wilderness of Sinai: –

The Lord is my strength and my might, and he has become my salvation. Exodus 15. 2a

Sent with joy at being able to share this strange and confusing journey with all of you.