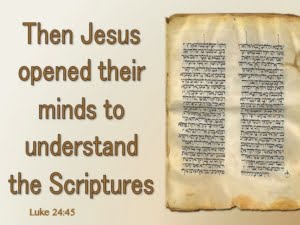 Then he opened their minds to understand the scriptures, and he said to them, ‘Thus it is written, that the Messiah is to suffer and to rise from the dead on the third day, and that repentance and forgiveness of sins is to be proclaimed in his name to all nations, beginning from Jerusalem. You are witnesses of these things. Luke 24.45-48

Do you ever have that experience of watching something on television or listening to a conversation when something strikes you and when you share your insight with others, they look at you and say – so and so has just said that or we have been trying to get you to realise that for ages. Your mind has skipped over the observations of others because at the time it just seemed irrelevant or incorrect. It is only when you have come to the same understanding or conclusion that you take in what others have been trying to tell you.

How many times did Jesus tells his disciples that the Messiah is to suffer and rise from the dead on the third day? Their subsequent actions over the days of his arrest, trial, torture and death suggest that they did not really take this on board. So, when on the evening of the first Easter Day Jesus appeared among them, he told them again what had been written about the suffering and resurrection of the Messiah. This time they got it. This time they had been witnesses to the reality, the fulfilment of these predictions.

This moment of clarity changed their lives forever. Their ministry was no longer about following a teacher around the countryside watching in wonder at the miracles he performed, trying to embrace his wisdom but failing to understand the deeper meaning of much he spoke about. They now truly grasped the magnitude of who Jesus was. Not the Messiah of their imagination but the Messiah of God’s creation, the Messiah that is indeed God.

As Jesus taught them over these precious resurrection appearances, they understood their future mission. A mission to proclaim the repentance and forgiveness of sins that had been accomplished by the life, death and resurrection of Jesus. A mission to and for all nations. We may not have the physical presence of Jesus among us, but we have the same scriptures that Jesus used to open the minds of his followers. The scriptures that draw us to the living Word who can interpret and clarify for us the ultimate truth of our place in the fulfilment of God’s plan for the redemption of the world. The scriptures which call us in turn to be witnesses of these things.