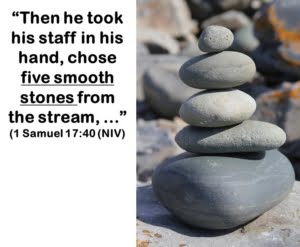 David strapped Saul’s sword over the armour, and he tried in vain to walk, for he was not used to them. Then David said to Saul, ‘I cannot walk with these; for I am not used to them.’ So, David removed them. Then he took his staff in his hand, and chose five smooth stones from the wadi, and put them in his shepherd’s bag, in the pouch; his sling was in his hand, and he drew near to the Philistine. 1 Samuel 17. 39-40

David has up until fairly recently been living the simple life of a shepherd. Not an unskilful life but a simple life in terms of the equipment he uses. When he accepted Goliath’s challenge David was offered the same level of equipment, but he realised that it just was not right for him. The weight was something he was not used to, as it restricted his movement. David knew that by trying to compete in exactly the same way he would lose his advantage. So, he ditched the unfamiliar armour and set about finding the weapons that would ensure his victory. Five smooth stones. Laughable in the eyes of the world, completely dismissible by the arrogance of the oppressor but five smooth stones that become lethal in the hands of a skilled sling specialist.

Goliath in his arrogance had forgotten the power that such a simple weapon could wield or indeed just how accurate a shot could be achieved. David knew exactly where to hit for maximum effect. Right on Goliath’s unprotected forehead. Throughout this story we are reminded that David had another even more powerful skill. His faith in God. He behaved as someone who fully trusted that God would ensure that everything would turn out all right in the end.

We like David are not unskilled. Not unskilled as individuals. Not unskilled as members of Mothers’ Union. We all have skills that are way more important than those valued by much of today’s society. We indeed have all the skills we need for God’s plan to be enacted. Truly coming to accept this will give us the strength and faith to not only endure but embrace the challenges that will inevitably come over the next few years, as we reconnect as branches and rebuild our community projects. Allowing God to use us and our skills so that we can carry out his mission on earth, as we reach out to support families in our local communities and across the world.