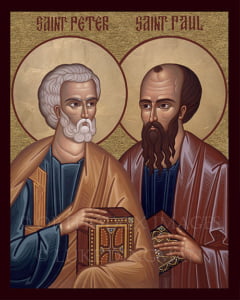 Suddenly an angel of the Lord appeared and a light shone in the cell. He tapped Peter on the side and woke him, saying, ‘Get up quickly.’ And the chains fell off his wrists. The angel said to him, ‘Fasten your belt and put on your sandals.’ He did so. Then he said to him, ‘Wrap your cloak around you and follow me.’ Acts 12. 7-8

This week, Tuesday and Wednesday are days of commemorating Saints Peter and Paul. The great founder fathers of our worldwide Church. Both died around 64-68 AD during the reign of the Emperor Nero. Their deaths were both preceded by several times of imprisonment. An inevitable consequence of preaching a message, which challenged authority wherever they came into conflict with it. Be it the Jewish Leaders, the Greek businessmen or the Roman hierarchy. During their times of imprisonment, they both had encounters which showed them that they were not alone. That the Lord was watching over them. Paul prayed and sang hymns as an earthquake opened all the doors and chains on one occasion of imprisonment. Peter’s chains fell off when he encountered an angel who led him out of captivity. The Lord had come to demonstrate his ability to set them and indeed us free.

Hopefully, none of us have experienced the indignity of being locked in literal chains but we all have things that imprison us: Our history, our current situation, poverty, ill health, obligations and indeed temptations. Things which trap us into a particular way of behaving that we would like to be set free from. What we see in the life and martyrdom of Peter and Paul is the power of God to set us free. Freedom that might be physical as in Peter’s encounter with the angel in Acts Chapter 12. Freedom that might be more spiritual as we read in the Letters of Paul written while he was in prison.

Over the last few weeks and months, we have experienced what it is like to regain our freedoms. A walk along the seashore, a visit to a coffee shop, a family gathering, possibly even attending a sports or entertainment event. Lifting our spirits far more than such occasions themselves have done in the past. What our walk with Jesus offers us is the experience of such joy in our freedom. Knowing that we need no longer be prisoners to the circumstances of our past or current situations. The freedom we can receive because of the sacrifice of Jesus on the cross is everlasting. Our chains have fallen off and we are able to follow our loving Lord as free citizens of his eternal kingdom.