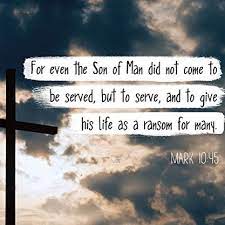 Before I went to Theological college I was a scientist, I was privileged to be in charge of a couple of laboratories which used genetic techniques to diagnose and monitor patients through treatment in various blood cancers. The laboratory was full of geeky looking equipment, PCR machines, centrifuges, suction pumps, incubators, class 2 containment cabinets to name but a few. But there was one essential item which caused some controversy as to who was qualified to operate it and that was the BIN. Yes, the Bin. On several occasions I had scientists with PhDs tell me that it was beneath them to empty the bin as that is what the technicians were paid for. As always on these encounters I would point out, very patiently, that, whilst it was the technician’s job, as a manager you should not ask junior staff to do something you are not prepared to do yourself.

This seems to be pretty much the message that Jesus is sending to James and John when they ask for positions of authority, leadership, and potentially great power. The great among the disciples will be the ones who act as servants, slaves even. There is no job too lowly. No sacrifice too great. No position too humble for those who wish to follow Jesus. This was not just a statement that Jesus made. It was the life he truly lived. Jesus did not sit in a golden palace, with the finest food, waited on hand and foot by servants. He lived with the poor, suffering, lowest members of society.

It is not always comfortable to act differently to the norms of the society we live in. It does involve getting dirty sometimes as we help the less fortunate. It does take up precious time when we could do with a rest. It does open us up to ridicule when we would rather shrink into the background. But we should always remember that Jesus is not asking us to do anything he was not prepared to do.

Jesus spoke out against unjust society,

Jesus ministered to the poor,

Jesus gave of his time unselfishly,

Jesus opened himself up to ridicule.

Jesus would empty the Bin.