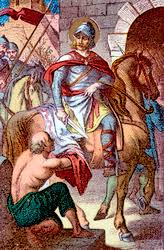 Tomorrow we remember Martin a late fourth century bishop who was born in modern day Hungary into a Roman pagan military family. He converted to Christianity at the age of ten and then at 12 begged to become a hermit. However, at the age of sixteen his father arranged for a recruiting officer to shackle Martin and take him away to serve in the Roman army for 25 years. Whilst in the army Martin learnt about routine, discipline and obedience which he later put into practice in his way of monastic life.

Even as a soldier Martin acted as a follower of Christ. One of the most famous stories told about him comes from this time. He met a beggar with almost no clothing on a very cold night at the gates of Amiens. So, using his military sword he cut his own cloak in half, giving half to the poor man. The same night Martin had a vision of Jesus wearing half a cloak, reminding him of the words from Matthew’s Gospel – Just as you did to the least of these you did to me. Martin was sure he had met Christ in the beggar.

Martin left the army refusing to fight anymore and determined to be a soldier for Christ. He still craved the life of a hermit but even when he founded a small monastic community it was not to last. He was dragged away by force in order to be made Bishop of Tours. Eventually, he managed to escape and moved into a wooden hut on the banks of the River Loire at Marmoutier. Here people continued to gather around him, 2000 men living in the caves that dotted the cliff side. Martin organised these followers as a military general, instructing and encouraging them in their mission to be soldiers of Christ, converting people from their pagan ways to become followers of Jesus.

It is lovely to imagine that some distant memory of St Martin, who refused to continue fighting, was in some way responsible many centuries later for the choice of the 11th of the 11th at 11 for the Armistice which ended WW1.