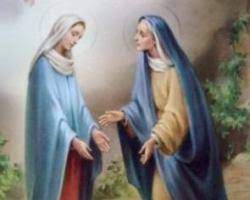 In those days Mary set out and went with haste to a Judean town in the hill country, where she entered the house of Zechariah and greeted Elizabeth. Luke 1. 39-40

Mary is unlikely to have travelled such a long distance to the Judean hill country unless there was something very urgent on her mind. She has had some almost unbelievable news but there was one way that she could find proof. The angel had told her that her relative Elizabeth was six months pregnant, so that is where she went. By this stage maybe, Mary was beginning to feel the effects of morning sickness. I imagine she was exhausted and relieved when she finally saw Elizabeth and Zechariah’s house come into view.

Not only did she see Elizabeth’s swollen belly, confirming the words of the angel, but in Elizabeth’s greeting she received the confirmation of her part in the story of the world’s salvation. As soon as Mary called to Elizabeth, she was recognised as the mother of God by the miraculous child in her cousin’s womb. And that leap for joy which her son did was enough to open Elizabeth’s spirit to the amazing truth now revealed to her by God. That here in front of her stood Mary, no longer just another relative but a truly extraordinary woman. Elizabeth’s words convey this depth of revealed faith. She blesses Mary with such clarity. Words that are still repeated and repeated thousand maybe millions of times each day:

Blessed are you among women, and blessed is the fruit of your womb.

A blessing given by a woman, a descendant of the first priest Aaron, in a time when women had no status in temple worship. Here is the beginning of the new order that is being inaugurated through the lives of these extraordinary women. Mary and now Elizabeth believed the words of God, that the fulfilment of his promise given through the prophets was happening in the here and now. They did not have to wait for that glorious Holy Night to come in order for them to greet the new-born king. They could rejoice before the rest of creation because they believed the signs they had heard and experienced.

What a truly amazing end to Mary’s journey, one I am sure she wasn’t expecting to be quite so wonderful.

Give me the grace to greet you without suppressed sighs of weariness.

Give me the generosity to invite you home without thought to the inconvenience.

Give me the will to rise to your demands, to share your love and to receive it.

With all my love and prayers at this Advent time