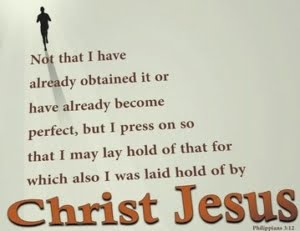 Not that I have already obtained this or have already reached the goal; but I press on to make it my own, because Christ Jesus has made me his own. Beloved, I do not consider that I have made it my own; but this one thing I do: forgetting what lies behind and straining forward to what lies ahead, I press on towards the goal for the prize of the heavenly call of God in Christ Jesus. Philippians 3. 12-14

This year as a Mothers’ Union we are called to Transform ourselves Now. This appears to be quite a big ask coming towards the end of the huge upheaval we have experienced as an organisation, as a diocese, as branches and as individuals over the past two years. As branches begin to meet again, as members venture back to church, as new leaders take on fresh responsibilities, as some individuals switch from branches to diocesan membership or to becoming indoor members, the added call for change can seem almost impossible.

Watching my granddaughter over the past seven months grow and begin to master the basic skills of holding her head or sitting up reminds us that all change is difficult to achieve. With each new ability there are relapses, when tiredness sets in, confidence is knocked, bodies are hurt, and tears are shed. Babies and children have such an inbuilt instinct to master these skills that they pick themselves up and start again and again until they achieve their goal.

As adults, we have become so conditioned to the negative voices in our heads that we are often not willing to start or continue a project that we assume is doomed to failure. In Paul’s letter to the Philippians, he urges us persevere and press on with the goals to which Jesus has called us. Our goal as MU members in this diocese, is to share the love of our Lord with families in our local communities and further afield. It may be as a result of the pandemic we can no longer carry out our mission in the way we did before. We can, however, transform our work into new spheres of action.

Lent is traditionally a time of increased prayer and prayer is an activity that is not based on physical ability or in-person branch meetings. Family lives can be transformed through prayer and all of us can become increasingly effective in our prayer lives. Just like learning a new physical skill, effective prayer takes practice. There will be knocks on the way, times we feel like giving up, times of tears but like we managed when we were learning to walk, we can pick ourselves up, brush ourselves down and try again.

Loving Lord, during this season of Lent we invite you to transform our movement and ourselves through the power of prayer.

With all my love and prayers for a Holy and Prayerful Lent.