16 Days of Activism Against Gender Based Violence Service 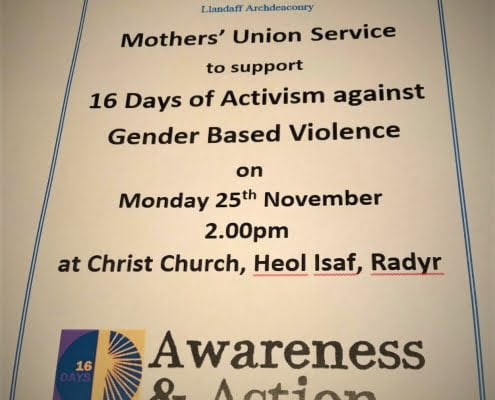 The Mothers’ Union in the Llandaff Archdeaconry will hold a  service  at Christchurch, Heol Isaf, Radyr on Monday 25th November, 2019 at 2.00pm to mark the start of the Mothers’ Union Campaign of 16 Days of Activism against Gender Based Violence.

All are welcome and light refreshments will be served after the service.

Mothers’ Union campaigns around the world, through our 4 million members in 84 countries, for an end to gender-based violence – violence carried out most often against women and girls because of their gender.

LIGHT A CANDLE SERVICE TO MARK THE INTERNATIONAL DAY FOR THE ELIMINATION OF...
Scroll to top
This website uses cookies to improve your experience. We'll assume you're ok with this, but you can opt-out if you wish.Accept Reject Read More
Privacy & Cookies Policy