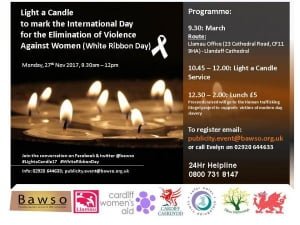 To mark the International Day for the Elimination of Violence Against Women (also known as White Ribbon Day), Bawso (Black Association of Women Step Out) Held their annual Light a Candle service at Llandaff Cathedral.
The day began with a march from Cathedral Road to Llandaff Cathedral, arriving in time for the service at 11am, and followed by a fund-raising lunch.
Llandaff Mothers’ Union members attended this event in line with the launch of our 16 Days of Activism against Gender based Violence. During the service, Diocesan President, Sue Rivers, lit a candle with other faith leaders, to remember the victims of violence.

Bawso is an All Wales voluntary organisation, providing specialist services to victims and BME people affected or at risk of by Domestic Abuse and all forms of violence; including Female Genital Mutilation, Forced Marriage, Honour Based Violence and Human Trafficking. 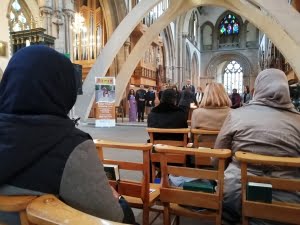