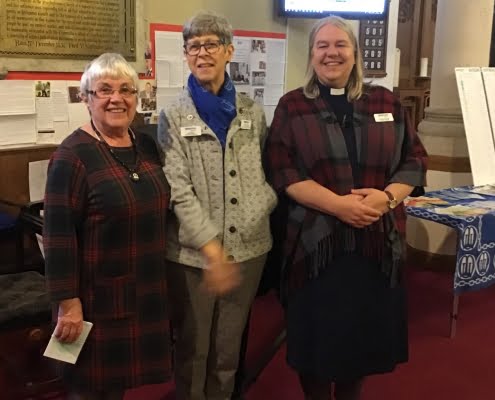 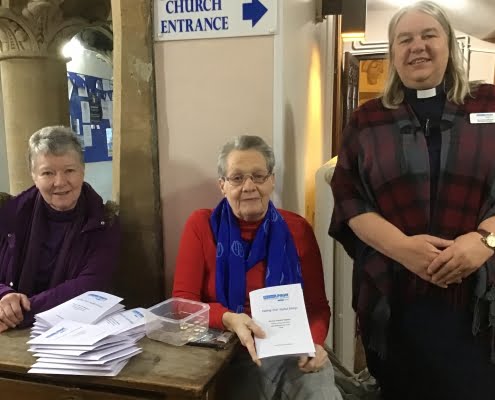 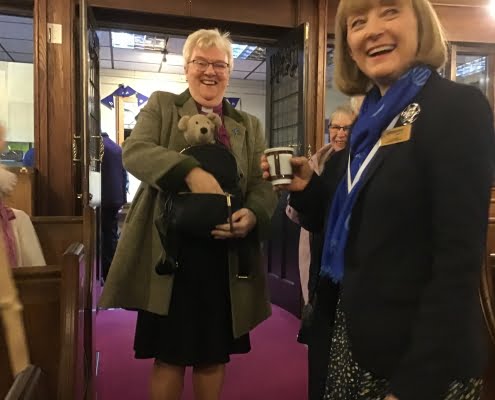 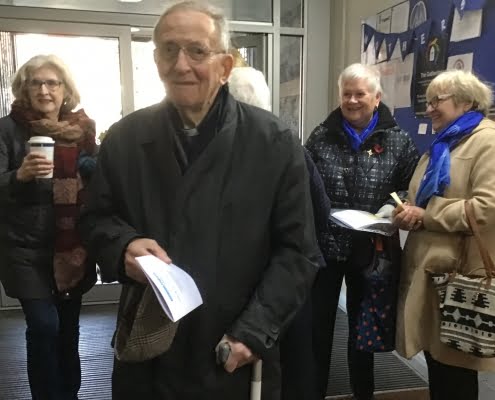 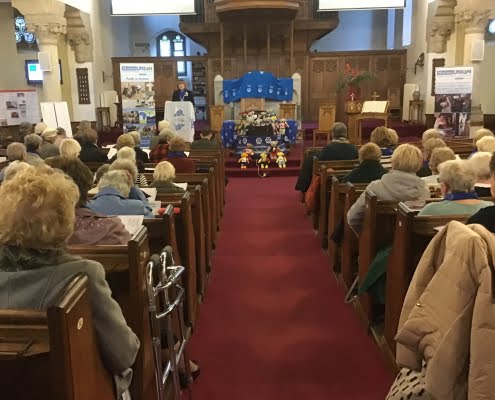 Our AGM was held in the United Reformed City Church at the beginning of November with many members in attendance. We were delighted that Bishop June Osborne was able to attend our meeting and give the Address.
The Opening worship was led by our Mothers’ Union Chaplain, Revd. Sandra Birdsall with the opening hymn appropriately being ‘We have a gospel to proclaim’
Bishop June’s Address
Bishop June addressed the meeting, by referring the statement made at our Worldwide President Sheran Harper’s commissioning, that Mothers’ Union is ‘the best kept secret in the Anglican Community’ stating that there is nothing secret about Mothers’ Union in this Diocese and that we are making a joyful contribution to the Diocesan Vision exclaiming “You are glorious!”.
Bishop June related her experience of Mothers’ Union during her time in South Sudan, a country ravaged by civil war affecting communities far and wide. It was the members of the Mothers’ Union there, that had kept the leadership of the communities going, as the men had left to fight the war and were often killed. The Church in Wales Centenary Appeal to celebrate the disestablishment of the Church in Wales will be divided between a charity to support Homelessness in this country and the crisis in South Sudan.
She wanted to celebrate “the formidable women in Mothers’ Union in this Diocese” – at diocesan, deanery and branch level stating that Mothers’ Union plays a major part of the Diocesan Vision ’Where Faith Matters’ in shaping the future, as it is at the centre of that delivery. As she goes around the Diocese and talks to loyal and dedicated parishioners, they look despondently on how society and Church has changed. Mothers’ Union takes a positive response to social change in the Church and takes an interest in what life is like for women today addressing the epidemic of loneliness not just for the elderly but young mothers as well; mental health issues of children and young people such as self-harming; the pressures of austerity on family life, domestic violence etc. Mothers’ Union does not turn its face away from the realities that women face daily but shows that God is present, and that Faith matters by proclaiming our faith in all that we do.
Bishop June stated that we have so many joyful stories to talk about and that Mothers’ Union in this Diocese is growing the Kingdom of God and building the capacity to do good by working out what is needed in our communities and addressing needs. This was confirmed by the MULive spreadsheet which summarises the Action and Outreach projects of deaneries and branches across the diocese and is incredibly impressive. Bishop June cited examples from MULive of the initiatives undertaken by branches showing the spread and contrasting nature of projects, stating that there is a great sense of achievement with stories of impact, giving life and hope and leading people back to faith.
Bishop June stated that the projects are impressive, but it is the purpose of Mothers’ Union that matters – knowing Christ and making Him known through our prayers and actions. Ensuring that the Resurrection is at the heart of people’s lives, letting people know that light is stronger than darkness and love is stronger than hate and giving hope in the middle of tragedy and decline. MU offers friendship, compassion and support to so many.
She concluded by staying “You tell others that Faith matters and to hold on to their trust in God. Your Bishop is so very proud of you”
We are so grateful for Bishop June’s support and words of encouragement as we go forward in this triennium.
Please watch the video below

President’s Address
Sue Rivers thanked Bishop June for her address and the wonderful support that Mothers’ Union receives throughout the year.
Sue stated that from the Commissioning service in January, through Quiet Days, Deanery Festivals, Archdeaconry Eucharists the Caravan Open Week, and the visit of our WWP, she had experienced the warmth and fellowship of members. The support she and others had received from our MU Chaplain has been immense stating that Revd. Sandra was always so willing to contribute and support us in our work. She thanked Sandra for this inspirational initiative of the MU Artefact – Book of Pilgrimage.
The Trustee Board, with its Unit Coordinators and Advisors are leading us in worship, campaigning, action and outreach and marketing our work and will continue to help us build our capacity for good and grow the kingdom of God here in Llandaff.
To date Trustees have agreed the Llandaff Diocese MU Constitution in line with MSH, a code of conduct for Trustees and Deanery Officers. Policies such as Safeguarding, Privacy and GDPR and a Financial Reserves Policy are being developed and a Units Together meeting where unit advisors will plan events for the coming year and the administration required to run the organisation.
Sue stated that at the Commissioning of Sheran Harper, WWP at Southwark Cathedral, the Archbishop of Canterbury spoke about the simplicity of the New Testament and how, once called by God, He “takes us by the hand and takes us on the greatest adventure that there is, the adventure of Christian discipleship. That adventure has taken Mothers’ Union from Mary Sumner in the countryside of England to a worldwide organisation on which people can depend,” he said. He spoke of the challenges that many Mothers’ Union members face in their work of supporting the communities in which they live and serve, “in many places you will have to bear the cross of other people’s suffering. Whether it’s in Burundi, Guyana, South Sudan, Nigeria or in the towns and cities of Britain, whether it is domestic violence, whether it is loneliness, whether it is spiritual emptiness, the Mothers’ Union is there bringing hope and a future. So, make yourselves known,”
Today’s society is so different to that of Mary Sumner, and Sue related a service at St Martin’s Roath, Cardiff, where Fr Irving Hamer drew attention to the life and times of Mary Sumner –the Downton Abbey era – the rich and the poor, the have and have nots. Not too dissimilar to today, with the need for foodbanks and the increasing incidence of homelessness. In those days’ mothers did not work and had to give up employment once married – how different to today – mothers often have full time work as well as running the home and there is an increasing role for grandparents to take on child minding roles. Fr Irving gave us examples of the different kinds of family that exist in today’s society – single parent families, multi parent families, families with same sex parents as well as the traditional heterosexual two parent families and he asked of us the question ‘ What would Mary Sumner think of family life today?’ and he hoped that we would agree that the family unit is based on love and through this will come to know the love of Christ.
Sue said that the prayer of general thanksgiving includes the verse:
‘We thank you for setting us at tasks which demand our best efforts and for leading us to accomplishments which satisfy and delight us.’
Stating that this really sums up how she feels as President. Having been elected President of this wonderful organisation, she is committed, with God’s help, to giving it her best effort. At times it can be demanding but the rewards she has enjoyed have truly satisfied and delighted her. She has been overwhelmed by the support and commitment of members, Trustees and Officers and this was so evident when everybody’s efforts came together on the first Friday in September to host the visit of the Worldwide President. What a day we had! Sheran Harper was inspirational but MU members were such a wonderful inspiration that day as well.
Sue reflected on the visit to the General Meeting in Portsmouth, and how our Worldwide President was truly impressed with the work of the Diocese, especially the commitment of Jodie Taylor, and her work in Parc Prison.
Whilst at the caravan, Sheran was interviewed on video by our Diocesan Director of Communications, Matt Batten and as some members had not seen the video, she played the video to the meeting.
Sue finished her address by stating that as Llandaff Mothers’ Union, we celebrate our achievements by telling our joyful story, but we still have much to do with God’s grace.

Year of Pilgrimage – Revd Sandra Birdsall
Revd. Sandra Birdsall told the meeting of Mothers’ Union plans to celebrate our 2020 Year of Pilgrimage, stating that Pilgrimage is about our journey through life not Mothers’ Union members walking around the Diocese.
She related her visit to Santiago de Compostela with the Clergy School in May, and they were challenged ‘’What are you going to take home from Santiago?”. She went with Canon Ruth Moverley, previous MU Chaplain, to the Cathedral and came upon a gorgeous book in the gift shop. It has the pattern of the door of the Cathedral embossed on the cover, with many pages inside and thought that this would make a wonderful artefact for the Mothers’ Union pilgrimage. The book once blessed by the Bishop at the launch of the Year of Pilgrimage on 12 January, would make its way around the Diocese, visiting every branch in every deanery. A timetable of the Pilgrimage route is printed in the AGM Booklet.
Each branch could insert whatever inspires them – a poem, a prayer, a reflection, photograph, artwork, thoughts on pilgrimage.
To assist members Revd, Sandra read a passage from The Book of Margery Kempe, a medieval text of an English Christian mystic and pilgrim who lived at the turn of the fifteenth century, on her visit to the earthly city of Jerusalem.
This gorgeous book, from Santiago, will capture memories and events throughout the year and will return to the Cathedral on 10 January 2021. Revd Sandra asked for suggestions of how we will utilise the artefact on its return.

UNIT REPORTS
Unit Reports were given by Margaret Jones, Faith and Policy Unit Coordinator; Raye Saunders, Marketing Unit Coordinator; Lowrie Washington-Jones, Action and Outreach Coordinator and the Financial Report was given by Sheila Jones, Diocesan Treasurer.
QUESTION AND ANSWER SESSION
A Question and Answer Session was held with questions from the floor being answered by the members of the Board of Trustees.
CLOSING WORSHIP
Our Closing worship which included Midday Prayers was led by Revd Sandra Birdsall and concluded singing the hymn ‘One more step along the world I go’ such an apt hymn for the Year of Pilgrimage!