The Eve of the Feast of the Apostle Matthias 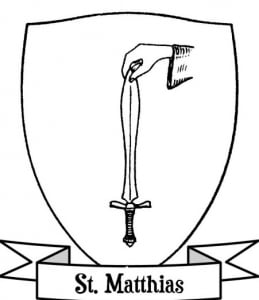 Tomorrow (14th May) the church celebrates the Feast of the Apostle Matthias. Originally held on the 24th February, but as that date generally fell in Lent, it was moved! Matthias was a devoted follower of Jesus. He had followed Jesus right from the time Jesus was baptised by John the Baptist. He is not mentioned in the gospels by name, but there are several places where it is clear that there were many more disciples than the 12. These other disciples gave up their time, their livelihoods, and their safety to follow Jesus from one part of the region to another. They were sent out alone to heal the sick and tell people that the kingdom of God had come near. These unnamed yet loyally devoted followers of Jesus brought joy and hope into the lives of those they served.

Uniquely for Matthias, this unrecorded life of service developed as he was called to join the ranks of the Apostles. Two names, Joseph and Matthias were proposed to replace Judas Iscariot as the twelfth Apostle. Then the eleven prayed for guidance as to which one should be promoted, and Matthias was chosen. Plucked from the ranks of those who served in anonymity to the public role of witness to Jesus’ Resurrection.

It is though his promotion, that we get a glimpse of the presence of all those who work tirelessly without being credited personally. Their reward instead is in the knowledge that they have helped people through the struggles encountered in their daily lives. Yes, it is nice to be acknowledged occasionally but the work Mothers’ Union members do is not about personal glory. Instead Mothers’ Union members are called, just as the outer circle of disciples were, to witness to the presence of God’s Kingdom on Earth through love, care, and support of those we serve.

Loving Lord, we thank you for the opportunity to serve you through our work for Mothers’ Union. Help us hold on to that role despite the current crisis. We pray for those we usually serve through our community projects, that they are kept safe at this time. We pray for a safer future when we will be able to re-engage in person with them. Amen

Sent with love and prayers,