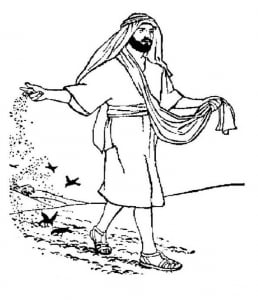 In today’s gospel reading we get a sense of the randomness of planting by hand when compared to the regimented rows of crops we see on mechanised farms. The sower scatters the seed, throwing out handfuls as they walk along. The seeds land in different places, some suitable for growth, others not. This sort of sowing could be described as wasteful. Why allow the seed to land where it is obviously not going to be able to put down roots and grow. The same could be said for the sowing of the word of the kingdom.

God is not trying to make a profit by ensuring that every seed, every spreading of the word, makes as much as a return on investment as possible. God is instead intrinsically generous. Generous to the point of wastefulness you could say, we too can become sowers of the word and as such we are encouraged to sow God’s word everywhere. In the places where we can expect a high return on our investment but also in all those unlikely places where we assume that our message will be rejected instantly. Even on the path or the rocky places there could be little pockets of fertile soil which will lead to high yielding plant growth. So, we each can become like the profligate sower in the parable, finding joy in our generosity and not resenting our time as wasteful when our message is not received or acted on.

Sometimes when we reflect on our call as Mothers’ Union members the task of supporting struggling families just seems too big. We can be tempted to limit our activities to those which are guaranteed to produce the highest yield. Instead we are called to be as generous and wasteful as God the ultimate sower of the word. Taking risks with new initiatives in our communities, inviting new people to come along to our meetings (virtual or eventually face to face), sharing our mission and prayers as generously as the profligate sower.

The field is the world. Lord, we live in a tiny patch of your world, but it is still our field to serve you. We pray that we will give our time and gifts to you and yours in whatever way we can. Your kingdom come, O Lord. Amen

With love and prayers,