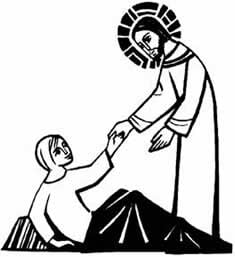 After leaving the synagogue he entered Simon’s house. Now Simon’s mother-in-law was suffering from a high fever, and they asked him about her. Then he stood over her and rebuked the fever, and it left her. Immediately she got up and began to serve them.

I do not know about you, but I always feel a bit sorry for Simon’s mother-in-law. Not only are we not told her name, just that she had a high fever. But instead, the detail of her serving Jesus and the other people in the house that day is explicitly included. Potentially drawing us to the conclusion that she was worth more as a servant than an individual.

It was of course wonderful that Jesus cured her from her fever, but she is not allowed any recuperation time. We are told that immediately she got up and began to serve them.

Not so with all the people Jesus healed – Jairus’ daughter is given something to eat.

The lepers are sent to the temple to show themselves to the priests.  And I am sure that Lazarus must have had a few days rest after being raised from the dead.

Most of the healing stories do not contain the details of what happened to the person next. The focus is on Jesus and often the arguments that broke out afterwards. But in the healing of Simon’s mother-in-law, in the intimacy of his friend’s home, we are given a glimpse of the reality of a miraculous healing. Not only was the fever cured but her body and mind were restored to full health immediately.

The ultimate goal of medicine is to find the so-called magic bullet. The cure that has no side effects, something elusive in most treatments that we have experienced.  After surgery, swelling, itching scars and strict physiotherapy regimes to bring back muscle strength. Antibiotics leave us tired or with stomach upsets. Medicine to dry up our colds leave our fluid balance out of kilter. Chemotherapy and radiotherapy cause immediate side-effects such as sickness and hair loss and even when the cancer is cured there are often long-term side effects, difficulty swallowing due to damaged salivary glands, infertility, damaged muscles, and skin.

Not so with Jesus, he cured both body and mind, soul, and spirit. Releasing people from their health burdens and the burden of their sin. Leaving people feeling lighter, freer, and invigorated. Such that getting up immediately and carrying on with normal life becomes a joy. Simon’s mother-in-law was so grateful that she probably felt compelled to offer Jesus hospitality. It was her way of saying thank you. Thank you for the greatest gift of all.