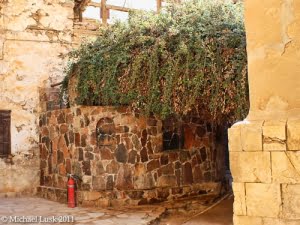 There the angel of the Lord appeared to him in a flame of fire out of a bush; he looked, and the bush was blazing, yet it was not consumed. Then Moses said, ‘I must turn aside and look at this great sight and see why the bush is not burned up.’ When the Lord saw that he had turned aside to see, God called to him out of the bush, Exodus 3. 2-4

I am lucky enough to have had the opportunity to visit St Catherine’s Monastery at the base of Mount Sinai in Egypt. The monastery was reputedly founded by the Emperor Justinian around the Chapel of the Burning Bush. The bush present there today, is a lovely green shrub in a walled monastery built in a landscape of desolate desert. Not really my image of the dry twigs alight, that I imagined when I read this passage.

More amusingly, right alongside the bush is a fire extinguisher. We wondered why it was there. Was it a joke to make tourists laugh, or maybe visitors have tried in the past to set it on fire and the extinguisher is there for health and safety reasons? If we reflect deeper though, it suggests a lack of belief in the events in Exodus. If by some miracle the bush spontaneously reignited, it appears that we as humans would extinguish the fire.

Despite being in a monastery of deeply devoted Greek Orthodox monks, served by the Bedouins who are Muslims who revere the story of Moses equally, there appears to be a lack of conviction as to the story in the Scriptures. This probably reflects not a lack of belief in the biblical story, but in the possibility of such an appearance of God in this day and age.

But that is not true, we know that God continues to call each of us with a personal message. The message may change over time. When we are young, we might be called to use our physical skills for God’s purpose. Later, we might be called to use our learning and experience. Later still, our spare time as our family and work commitments decrease are used in prayer. Even when we begin to lose our physical abilities, God can use our prayers for a specific purpose. Listening to God may tell us who or what we need to pray for. Moses when he turned aside on his walk in the wilderness heard a personal message from God. So, we will hear our personal message when we turn aside to whatever sign God is using to call us.

Going back to that bush with the fire extinguisher at Mount Sinai, we can ask ourselves.

Would we trust that the fire would not consume the bush and hence the surrounding areas would be safe?

Would we have the strength of our convictions to let the bush burn?

Would we embrace the fire as a message from God?