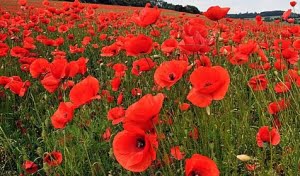 Last Sunday we had to remember those who paid the ultimate sacrifice without being able to attend church or partake in any public act of remembrance. Today, on Armistice Day, we can have church services and gather outside but only in very small numbers. What a difference 72 hours makes! 12.01am on Monday morning changed where and what we can legally do. 11am on the 11th of November 1918, was just such a pivotal moment in the lives of the troops on the front line. The war was over. Peace had come. The shooting had stopped. Some units carried on fighting right up to the deadline and, a small number carried on after 11am or indeed after the 11th day of the 11th month because the message just did not get through.

The fighting may have stopped but people continued to die from the consequences of the war for many years. I have a Women of the First World War Royal Legion Poppy brooch in memory of MB Stalker. A nurse in the Queen Alexandra’s Imperial Military Nursing Service who died on the 18th of January 1921 as a direct result of the First World War. The ripples of traumatic events continue long after the events themselves. How many years did it take to get back to some resemblance of normality after the Second World War? VE and VJ days may have marked the end of hostility but the business of rebuilding our nation had only just begun.

On Monday, we all heard some really encouraging news – one of the vaccine trials was progressing so well that it might not be much longer before it is licensed for public use. One of several pivotal moments that will help us negotiate a way out of this crisis. Life will never be the same again but with mass vaccination programmes we will be able to meet in larger numbers and share the comfort of physical human contact.

In our gospels, we read about many such pivotal moments in the lives of those who encounter Jesus, those who had disabilities, those with physical and mental health problems, those ostracised by society. Their encounters with Jesus ensured a path for them to rebuild their lives and re-enter their communities and places of worship. Jesus brought them hope and confidence to rebuild their lives. So, we too pray that as we see a new path out of our current troubles, Jesus will be there alongside us helping us to rebuild our hope and confidence in ourselves and in our Mothers’ Union branches and projects.