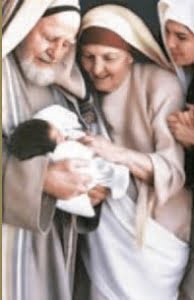 Advent is a time of expectation, watching and waiting for the new beginning fulfilled in the birth of a very special child. Even before his earthly parent’s began their journey of expectation there was another set of parents who were waiting. Waiting for the fulfilment of their deepest desires. Elizabeth and Zechariah had longed for a child but had probably realistically given up believing that their wish would be fulfilled. Fulfilled it was, however, with the news from the angel that they would have a son, not just any son. Their son was destined to make ready a people prepared for the Lord.

The child was not going to follow in the footsteps of his father a temple priest, a chip of the old block. Instead, they were told his future, how he would be filled with the Holy Spirit from birth avoiding the more usual ‘spirit’ consumed at this time of year – wine or strong drink. I do not suppose that really bothered Elizabeth and Zechariah. They were just grateful for the opportunity to be parents. They were as the angel said – filled with joy and gladness.

Zechariah’s response to this news initially was one of disbelief, questioning the angel. How? We are too old! The angel appears on the surface to punish his disbelief but actually he received a gift. A time of silence in which to come to terms with the news, in which to take in the joy of the unfolding events. A time where Zechariah begins to understand the significance of the events he is witness to. We see how far he has travelled in his understanding when he speaks his famous words of prophecy – the Benedictus:

Blessed be the Lord God of Israel,

for he has looked favourably on his people and redeemed them. Luke 1. 68

These are almost the first words he spoke after his son was born. The first being to name him John. In obeying the words of the angel his voice was returned and he said to his long-awaited son:

You child, will be called the prophet of the Most High:

for you will go before the Lord to prepare his ways,

to give knowledge of salvation to his people

In the lives of Elizabeth and Zechariah, we get a sense of just how precious something becomes when you have to wait a long time for it. A child, their position in society restored and indeed the salvation of the world.

I pray that what you are longing for this Christmas will come to fruition through the love of Jesus who knows the deepest desires of your hearts.