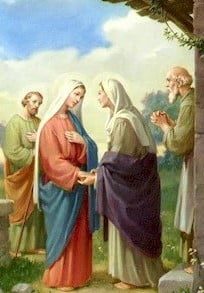 Blessed be God for the faithfulness of Mary:

For her courage, her boldness, her initiative;

For her willingness to journey, to change and to suffer;

For her wholehearted offering of herself to God and God’s work of liberation.

May we, too, be bold in believing,

And wholehearted in our participation in God’s work of justice and freedom. Nicola Slee

What a contrast Mary’s pregnancy is to that of Elizabeth! Mary is not an older woman relieved that finally she has her heart’s desire – a child of her own. Mary is a young single girl who has been sheltered from any potential scandal by the conventions of her society. Probably chaperoned even in the presence of her fiancé. We cannot even begin to imagine the bravery that saying Yes to the angel entailed. No one before or since is inclined to believe that any woman is telling the truth if she claims her pregnancy was the result of an immaculate conception.

As soon as she said Yes to the angel, Mary went on a journey. It may have been hard going physically but she was rewarded at the end with her encounter with Elizabeth.  The angel was telling the truth, not only that her cousin was pregnant but that her child was exceedingly special. Elizabeth’s words of blessing giving her the joy expressed in the words of the Magnificat but also the strength to face her family when she returned home.

Once she arrived home, she had to face the music well and truly. Joseph could easily have condemned her. She could have been thrown out of house and home as has happened to many women throughout history. Through God’s protection she came through this potential danger when Joseph believed the words of the angel.

Mary’s pregnancy came under threat again with the requirement to travel to Bethlehem. Childbirth is risky at the best of times, but Mary’s labour came at the end of a journey of over 90 miles which would have taken around 10 days at walking pace. No, Mary’s pregnancy was anything but smooth.

And yet Mary remained faithful in her commitment to fulfil the role chosen for her by God. I wonder if at times she felt knocked back and full of doubt when time and time again fresh obstacles appeared in her path. It is hard to face new setbacks just when you feel that you have conquered the last one. If we follow in the footsteps of Mary, however, we can learn to trust in the power of God to see us through the difficulties that life poses at the moment. Trust that because of Mary’s Yes there will always be light in our darkness. Light that will never be overcome.

Keep faithful, keep safe, keep trusting that the Lord is Near.