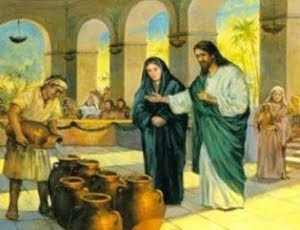 His mother said to the servants, ‘Do whatever he tells you.’ Now standing there were six stone water-jars for the Jewish rites of purification, each holding twenty or thirty gallons. Jesus said to them, ‘Fill the jars with water.’ And they filled them up to the brim. He said to them, ‘Now draw some out, and take it to the chief steward.’ So, they took it. John 2. 5-8

I am sure we have all had times over the past year when our faith has begun to wobble. Wondering why God cannot use his power to render the virus harmless so that lives can be saved, and we can get back to our normal sociable lives. Miracles happened in the Bible why can’t we have one? Reflecting on such miracles, however, they generally show an element of hard work and endurance on behalf of the recipients.

Today’s reading from John is a good example. There is a real partnership between Mary, the servants and Jesus in order that the embarrassment of the bridegroom might be avoided. Mary brings the situation to the attention of Jesus just as we bring our current worries and fear to him through our prayers. Jesus listens, replies to his mother. Maybe not exactly in the way she was expecting, but then Jesus acts in response to her unwavering faith that he will help. – ‘Do whatever he tells you’ she says confidently.

The servants, well, they must do all the physical work. Jesus tells them to fill six stone water jars with water. Stone water jars that each held twenty or thirty gallons of water. And with no convenient tap to fill them from, they would have had to carry the jars to the well. Maybe it was near the house. Maybe it was at the end of the village. No matter how far it was it was still an effort. But it turned out to be an effort that was worthwhile. The end product was beyond their wildest dreams. Not only was the day was saved, their master’s reputation was saved, the people continued to enjoy the celebrations, but the servants gained something more. They knew that it was the power of Jesus that had resulted in this blessing. They knew that following Jesus instructions, trusting in God produced amazing results.

So, we can be assured that if we follow the instructions to stay at home, if we go along and receive our vaccines when we are called and if we continue to trust in the power of God, we will see the miracle of the renewal, as the hold of this virus on our lives weakens.