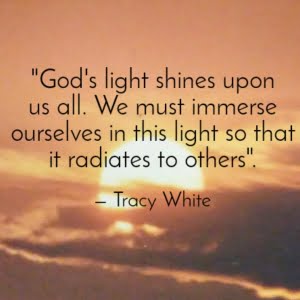 Six days later, Jesus took with him Peter and James and John, and led them up a high mountain apart, by themselves. And he was transfigured before them, and his clothes became dazzling white, such as no one on earth could bleach them. Mark 9.2-3

Peter, James and John accompanied Jesus up a high mountain and there he chose to reveal his true self to them. The part of him that was veiled during his earthly life. And we can see why in the reaction of the disciples. They were terrified. So terrified that Peter tried to normalise the encounter by making the rather mundane suggestion of building Jesus, Moses and Elijah an earthy dwelling on the mountain top. Nevertheless, despite the shock this transfiguration produced at the time, the memory of that day would have helped them in times of crisis. When they were rejected, threatened, imprisoned and tortured for refusing to deny that Jesus was the Son of God, they could remember the glory of God revealed in the transfigured Jesus.

We have each encountered the glory of God in different ways during our lives. For some it is in the beauty of creation. For some the smile of someone we love. For some the magnificence of music in a church service. For some a still small voice during a time of prayer. These are the memories we must return to at times of doubt, times of fear, times of loss. These are the memories that give us the strength to continue our walk with God, no matter how difficult the circumstances.

These are also the memories that assure us that we will be able to encounter the glory of God again and again. Maybe not in the same ways as before, but in new and exciting ways as we walk with him in our lives. We are about to enter the season of Lent and this year it will be a different sort of Lent. Many services and devotional opportunities will be curtailed or available only to those who can get to grips with the relevant technology. We do not, however, need to be in a large group of people to encounter the transfigured Jesus. Instead, we can make some time each day to pray and wait for Jesus to find us. For Jesus to reveal his glory to us in a way which makes our inner lights shine with his reflected light.