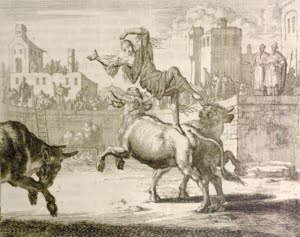 Who will separate us from the love of Christ? Will hardship, or distress, or persecution, or famine, or nakedness, or peril, or sword? As it is written,

’For your sake we are being killed all day long.

we are accounted as sheep to be slaughtered. Romans 8. 35-36

Today the Church remembers Blandina and her companions who were martyred in Lyons in 177 AD. The torture and killing of Blandina a slave, Sanctus a deacon, Maturus a recent convert, Pothinus the elderly Bishop of Lyons, along with other Christians was described by the early Christian historian Eusebius, approximately 150 years later. After a time of relative peace, the Christians in Lyons faced a time of increasing persecution. It began with social exclusion from public places, then their homes were vandalised, and they were subjected to verbal and physical assault by pagan mobs. This behaviour escalated to forced public questioning followed by imprisonment. Slaves from Christian households were tortured in an attempt to obtain public accusations of the practice of cannibalism and incest that the mob were convinced were a feature of Christian worship.

The fury of the mob reached fever pitch and the Governor set aside several days for a public spectacle of the punishment and execution of these Christians. Blandina held fast to her faith despite the torments heaped upon her by her torturers. She declared “I am a Christian and nothing vile is done among us.” She succeeded in encouraging the other Christians to stand firm in their faith, no matter what horrific physical pains they had to endure. After several days of being beaten, torn, burned with irons, she was wrapped in a net and tossed about by a wild bull. The spectators were amazed at her endurance.

As well as showing us the power of unwavering faith to help endure when times are more dreadful than we can possibly imagine, the story of Blandina and her companions gives us a stark warning about singling out one particular element of our society. What started as a dislike of the new, ended with mass torture and killing. The crowd egging each other on to greater and greater levels of hatred. It is a remarkably familiar story, which has led many a time in history to exclusion, oppression, and genocide. Blandina’s faith encourages us to remain faithful to the teachings of Jesus. That we should not judge others, leaping to unfair conclusions based on hearsay and terror tactics. Instead, we should endeavour to show to others the unwavering and enduring love of Jesus, by the way we behave under pressure.

May you always remain steadfast in your faith, no matter what the world throws at you.

All my love and prayers