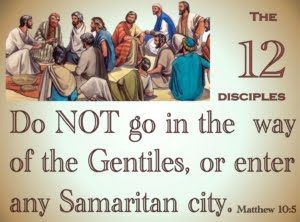 Then Jesus summoned his twelve disciples and gave them authority over unclean spirits, to cast them out, and to cure every disease and every sickness.

These twelve Jesus sent out with the following instructions: ‘Go nowhere among the Gentiles, and enter no town of the Samaritans, but go rather to the lost sheep of the house of Israel. As you go, proclaim the good news, “The kingdom of heaven has come near.” Matthew 10. 1, 5-7

These are the verses which surround the naming of the 12 disciples in Matthew’s Gospel. They give us a sense of exactly what these men were being called to do. To expel unclean spirits and cure every type of illness. A mammoth task which I am sure none of us would relish if we thought we were going to be assessed on our success at an annual appraisal. Their task, however, is not completely open ended. They are called individually and as a specific branch for this particular task. We know Jesus had other groups of disciples who are not included in the list of twelve. There are the seventy-two who are sent out in pairs as recorded by Luke and, of course, there are the many women disciples. Branches who were called by Jesus to fulfil other tasks in the proclamation of the kingdom.

As well as being given this specific task, the twelve were also told the boundaries of their mission. They were being sent to the lost sheep of the house of Israel only. Other people would be chosen to undertake the same mission to the Gentiles and the Samaritans. It is not that they are excluded from the kingdom of heaven rather they are not in the remit of this cohort of workers. So, it is with our mission as Mothers’ Union members. We see a whole tsunami of need in our local communities and throughout our global movement. In the face of such need, it is easy to be overcome with inaction as we feel the seemingly unresolvable dilemma of how to support all the needs and projects, we become aware of.

So, we follow the example of the disciples. We listen for the voice of Jesus which tells us which area of need we are called as branches to support. Then, we wholeheartedly give our time and resources to undertake the work that we have been called to. Just like the work of the twelve, it will not be easy, but it will ultimately be highly rewarding when we see the difference our efforts make to the individuals and families that we have been able to help and support.