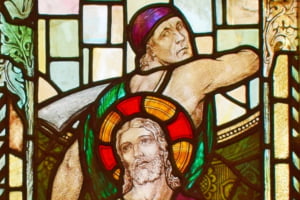 Immediately she rushed back to the king and requested, ‘I want you to give me at once the head of John the Baptist on a platter.’ The king was deeply grieved; yet out of regard for his oaths and for the guests, he did not want to refuse her. Immediately the king sent a soldier of the guard with orders to bring John’s head. He went and beheaded him in the prison, Mark 6. 25-27

‘I was only doing what everyone else was doing’ must be one of the commonest excuses given when a whole group of children gets into trouble. To which the universal reply of parenting is offered ‘if everyone jumped off a cliff would you follow them?’ Unfortunately, peer pressure is A very real and hard to shake reality for many of our young people. Temptation comes in many forms and increasingly that involves carrying weapons. The rise in the number of stabbings in our cities is staggering and is undoubtedly fuelled by peer pressure. “You can’t be in our gang if you don’t carry a knife.”

Gang leaders exerting their localised power over vulnerable teenagers in order to fuel their own egos. We would hope, however, that the people with the real power, such as those ruling a nation would have enough strength of character and courage to resist such obviously manipulative peer pressure. But sadly, this is often not so. History is full of megalomaniacs who just could not stop their greater and greater abuses of power because to do that would mean losing face.

Today, we are presented with one such tyrant – Herod Antipas. When faced with the terrible request from the daughter of Herodias for the head of John the Baptist on a platter, he was so afraid of losing face that he was not prepared to stick up for what he knew to be right. All his beliefs about John being a righteous and holy man disregarded for his own personal ambition. No Herod was not brave, nor courageous, nor principled, Herod was weak.

Compare him to John the Baptist, a man not afraid to speak up for what was wrong. A man whose sense of self-preservation paled into insignificance besides acting in the way that he knew to be right. John, by comparison to Herod was brave, courageous and principled. Not an easy position to uphold but John the Baptist had a much greater power than Herod on his side. The power of God, Creator, Sustainer and Redeemer through whose Word we need not fear short term discomfort but can have faith and courage in the long-term outcome. Looking beyond the peer pressure of this life into the promised joy of the Kingdom of Heaven.