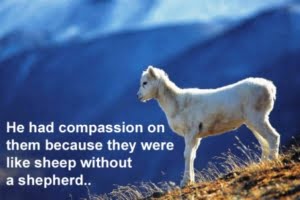 The apostles gathered around Jesus and told him all that they had done and taught. He said to them, ‘Come away to a deserted place all by yourselves and rest a while’. For many were coming and going, and they had no leisure even to eat. And they went away in the boat to a deserted place by themselves. Now many saw them going and recognised them, and they hurried there on foot from all the towns and arrived ahead of them. As he went ashore, he saw a great crowd; and he had compassion for them, because they were like sheep without a shepherd; and he began to teach them many things. Mark 6. 30-34

In today’s reading, we hear what happened when the apostles returned from their mission to cast out evils spirits and heal the sick. After telling Jesus all they had achieved, Jesus’ response was to lead them away for a time of rest and recuperation. A time to stop and eat a civilised non-rushed meal. The demands of the new celebrity status of these miraculous healers, however, soon took over again. As they got into the boat ,which was to ferry them to a deserted place, they were spotted. And as we know with the power of the paparazzi, the number of people ‘in the know’ as to where they had gone, soon grew exponentially.

This mass of fans was not going to be shaken off that easily and so they took the long way around by foot and arrived there before them. Maybe this says a lot about the efficiency of travelling by boat. Still, time on the boat leisurely travelling across the lake was not time spent in vain. This was a time for rest and recuperation for these disciples. After all, several of them were experienced fishermen for whom life on the water was as natural as sitting on dry land. So, when they arrived on dry land, they did not grumpily send the crowds away. Jesus had compassion for them and spoke to them teaching them many things.

In Jesus’ words and actions to his disciples and the large, gathered crowd, there is a clear message for us about the rhythm of life. There are times of rest and times of busyness. Times when interruptions are our work and times when we need to escape and concentrate on our own well-being. Times when we can only feel close to God when we are alone and times when the way we draw closer to God is through our interactions with others. Through the service we can offer and though the service others offer to us.

Make me an island, set apart,

Alone with you, God, holy to you.

Then with the turning of the tide

Prepare me to carry your presence.

to the busy world beyond,