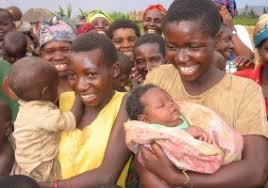 While he was saying this, a woman in the crowd raised her voice and said to him, ‘Blessed is the womb that bore you and the breasts that nursed you!’ But he said, ‘Blessed rather are those who hear the word of God and obey it!’ Luke 11. 27, 28

Today we celebrate the third feast of Mary, the commemoration of her birth. There are many different stories and alternative ancient writings which suggest what Mary’s birth and early life were like. Such as the wonderful golden mosaics which cover the walls of the Church of the Holy Saviour in Chora, Istanbul. Stories about Mary’s early life that I had never come across before, much to the surprise of the tour guide.  Mary is such an important woman that over time myth, story, legend and fact have all become mixed together as we instinctively want to know more about this woman, who was chosen by God to become his earthly mother.

If we listen to the words spoken by Jesus to the woman in the crowd, we begin to realise that establishing such facts are not the important details about Mary’s life. The woman focuses her blessing on the purely physical, the womb, the breasts, the material things of life. Jesus, however, changes the focus of why Mary is blest. She is blessed for hearing the word of God and following it. Something she did not only with her ‘Yes’ to the Angel Gabriel but with actions as a mother to the Son of God.

Mary continued her ‘Yes’ when she travelled to Bethlehem, when she looked lovingly at her newborn Son. When she picked him up and wiped away his tears when he was learning to walk. When she loved him and worried about him when he appeared to be lost. When she encouraged him as he grew into adulthood and began his mission. When she followed him in his ministry all the way to Jerusalem where he underwent his Passion. When she waited with the disciples in the Upper Room until she was filled with the Holy Spirit, which guided her as she obeyed the word of God for the remainder of her earthly life.

So, we too are called to obey the word of God as we seek to encourage and support stable marriage and family life where children are nurtured and cared for so they can reach their full potential. Something we do not do solely because we can but because we recognise the call from God.  What a wonderful blessing following that call is to each of us.