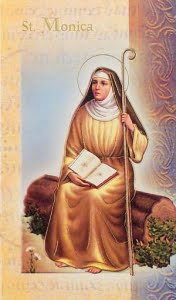 Tomorrow the church remembers Monica the patron saint of Mothers. Monica stands out among the female saints because she was a married mother rather than a virgin or nun. Her life can bring us hope, as we endeavour to carry out our mission to bring the love of Jesus to our own families and the families we encounter in our communities. Because Monica just did not give up in her quest to ensure her son’s conversion to Christianity. In fact, you could say her life became a bit consumed by it.

Monica lived in North Africa in the fourth century. She grew up in a Christian household and was determined to bring her own children up in her faith. Her eldest son, however, rebelled and lived a life of questionable morals and rejected his faith. Monica was not prepared to accept this. She prayed, she fasted, and she followed him. When he prepared to set sail for Italy, she tried to catch the same boat. He dodged her that time, but she caught up with him in Milan and moved in with him and his friends. Her son wrote – ‘She liked to have me with her, as mothers do, but far more than most mothers.’ Monica sounds like the nightmare mother most of us would not want to have or become – a bit obsessed to say the least.

Her determination paid off, however, with her son’s conversion, baptism and return home where he became the local bishop. He also became one of the greatest theologians of all time – Augustine of Hippo. It is because of his writings that we know so much about Monica. In his Confessions, he writes about the huge role Monica had in bringing him to faith in Jesus.

Monica’s story shows us that we should never give up hope of our loved ones finding the presence of Jesus in their lives. Maybe it will be more appreciated if we persevere in prayer and words rather than fanatically following our children, grandchildren or loved ones around. I doubt they would want us moving in with them when they begin lives of ‘dissolute living’! However, our example and encouragement can remind them that there is something much more fulfilling to be found in the love of Jesus. Like Monica, we can pray continually that those we love will find Christ and be used by him to share that love to others just as Monica’s son Augustine did. Who knows maybe our prayers and actions will inspire a future great spiritual leader in the Church.